My new studio is finally under way. After weeks of delay due to the dreadful weather we've been experiencing Richard from www.aarco.co.uk arrived. First off was laying of planks and moving of planks and a little head scratching and re-shuffling until we found a position we were both happy with.  There is a tree to the right of the plot with very enthusiastic roots, but as my beloved cat spends a good portion of her day happily keeping a look out from up there...AND because it's a beautiful tree the building will have to happen around it. Today I am looking to book a handsome tree surgeon to remove a good portion of it so that it doesn't get in the way (FWI ALL tree surgeons are handsome to me. This is probably an age thing, but who cares!!!). This really needed to be done regardless as it is a vigorous thing and needs to be kept in check.
This morning Richard and his trusty helper Elton shuttered the base and pummelled the hardcore flat with a large base pommelling machine! By lunchtime the cement lorry arrived and the base was poured. A dry day!!! It's a bloomin' miracle.
Now I have to keep the cats off it....paw prints I don't care about, but concrete can burn and you don't want your pets ingesting the stuff either. 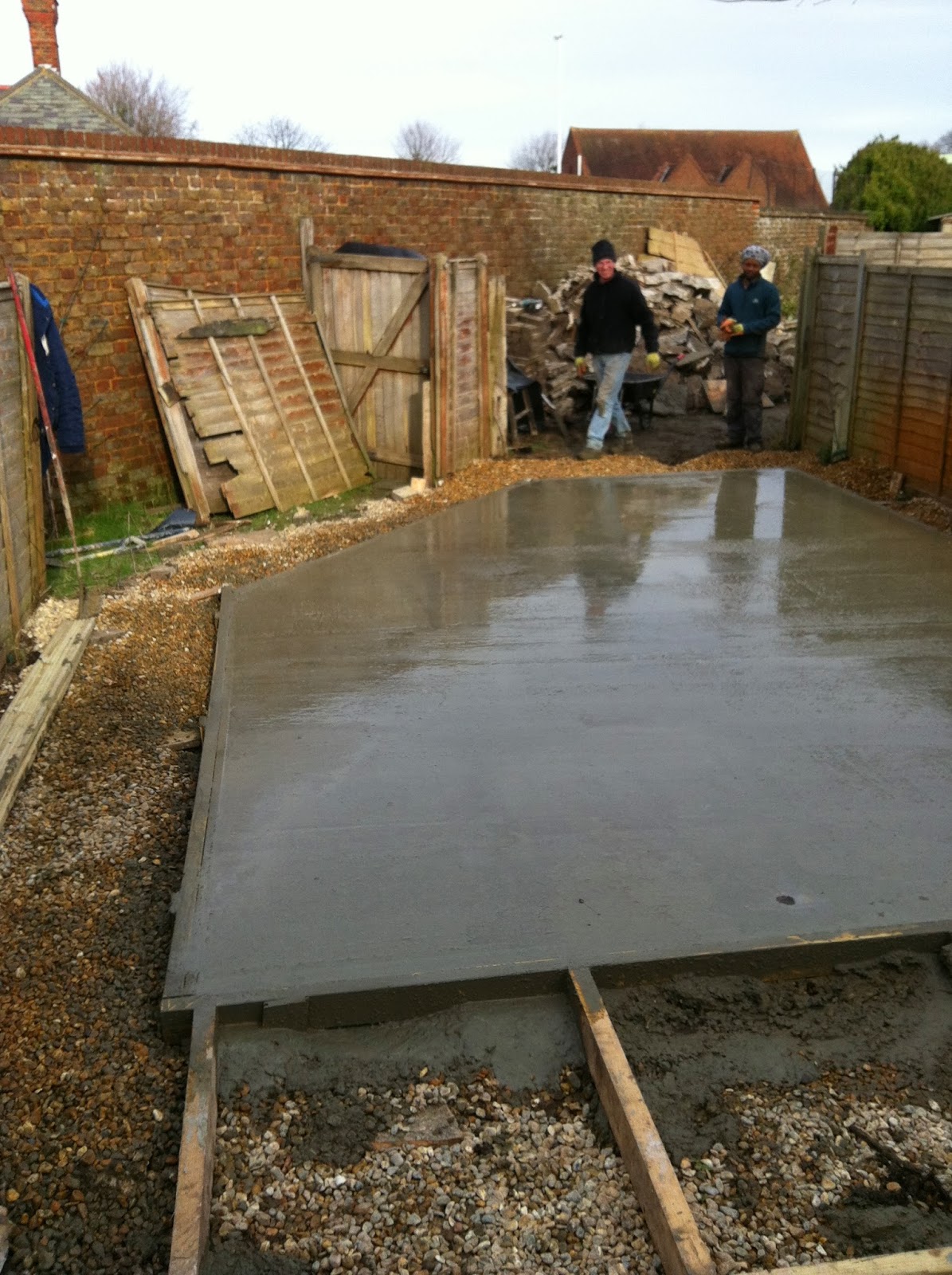 At the back on the left are my neighbours disintegrated fence panels. I'm happy to say that this was the hurricanes doing and not ours! The wind also took down all of our end fencing and some panels to the right which has actually proved very useful :)

18th
We locked the cats in over night so that the inevitable wouldn't happen. First thing I opened the back doors and Woo charged down the garden and started doing classic drift manoeuvers on what she seems to think is her new skid pan. Also the local fox couldn't resist leaving his mark. it's a pity the paw prints will be covered. 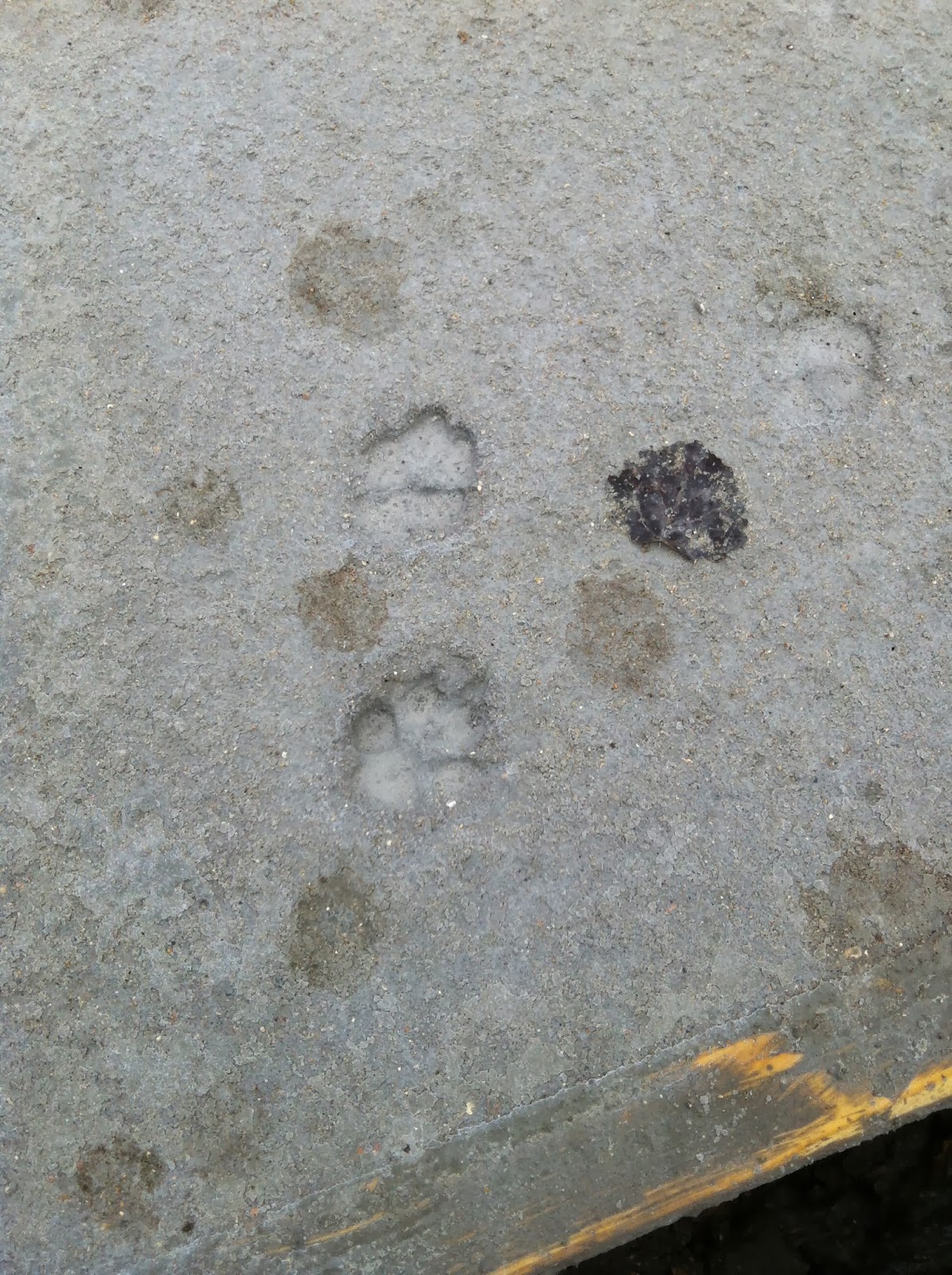 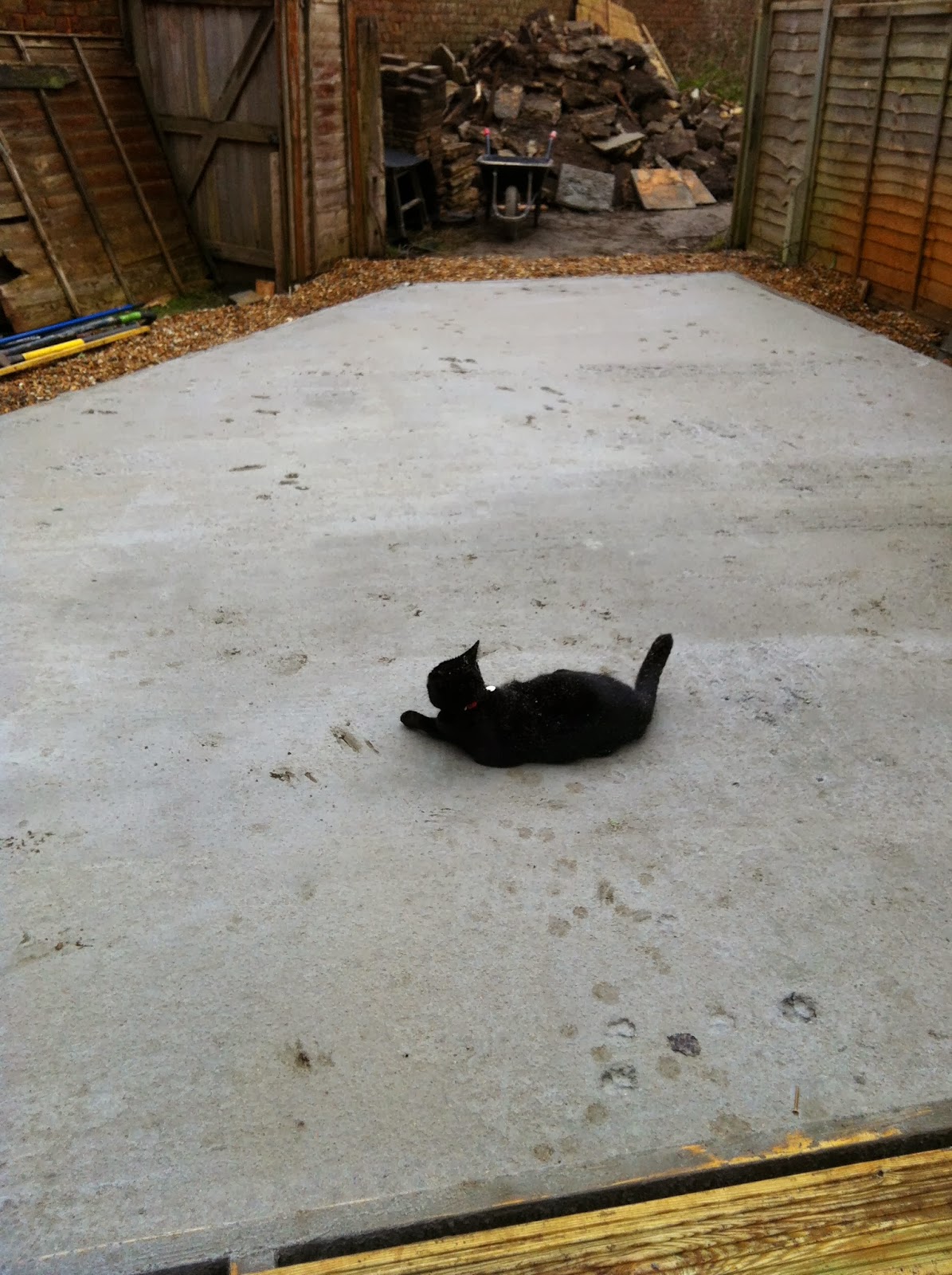 A sunny day, hoorah! Our friend Ian volunteered to come over with his chainsaw and do some "judicious" pruning on the Aspen to make room for the studio. 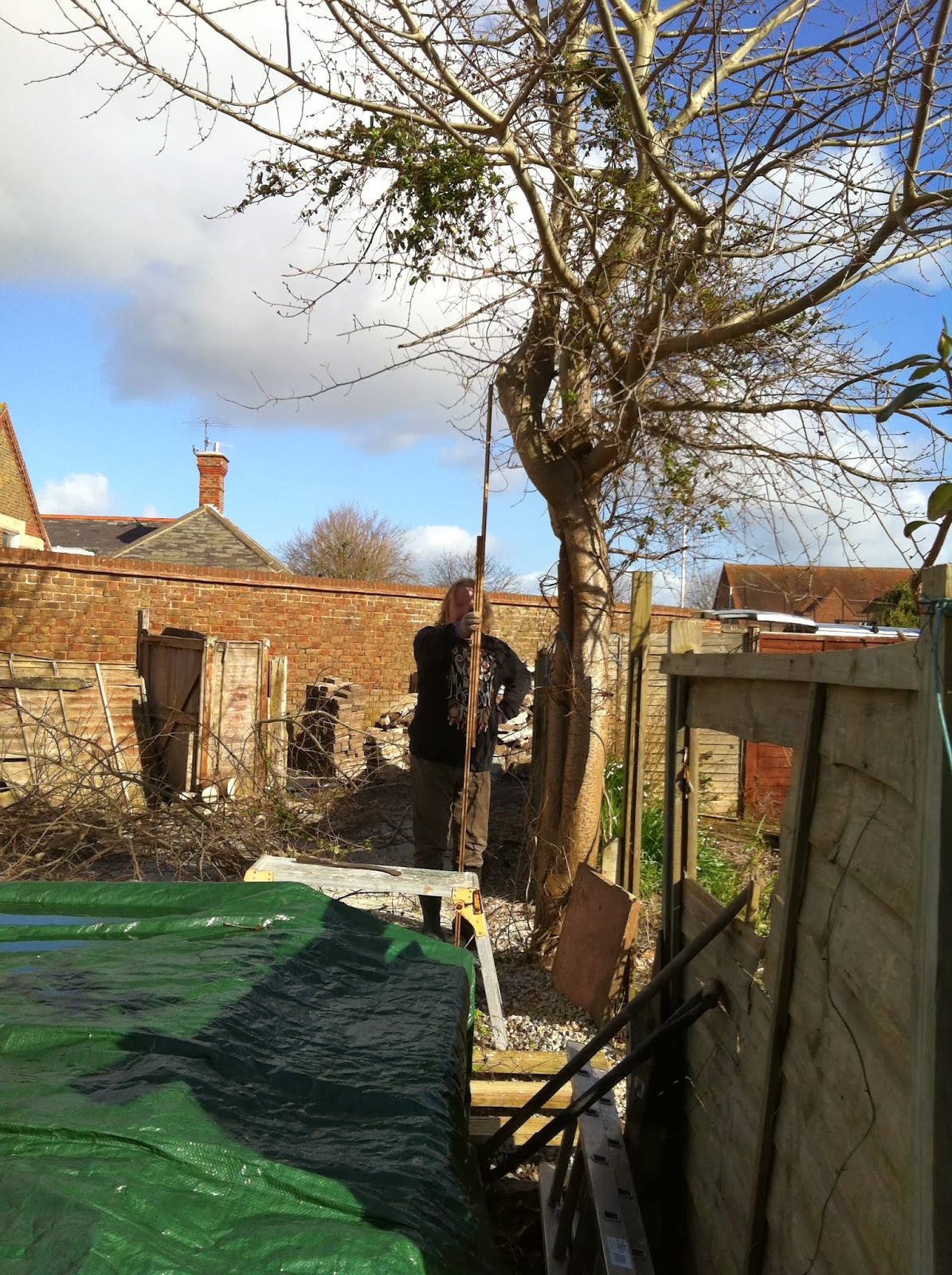 checking that we've taken enough off!


Ian taking a well earned rest
(seated on the minature wooden chair he fashioned from a bit of branch.....comfy!) 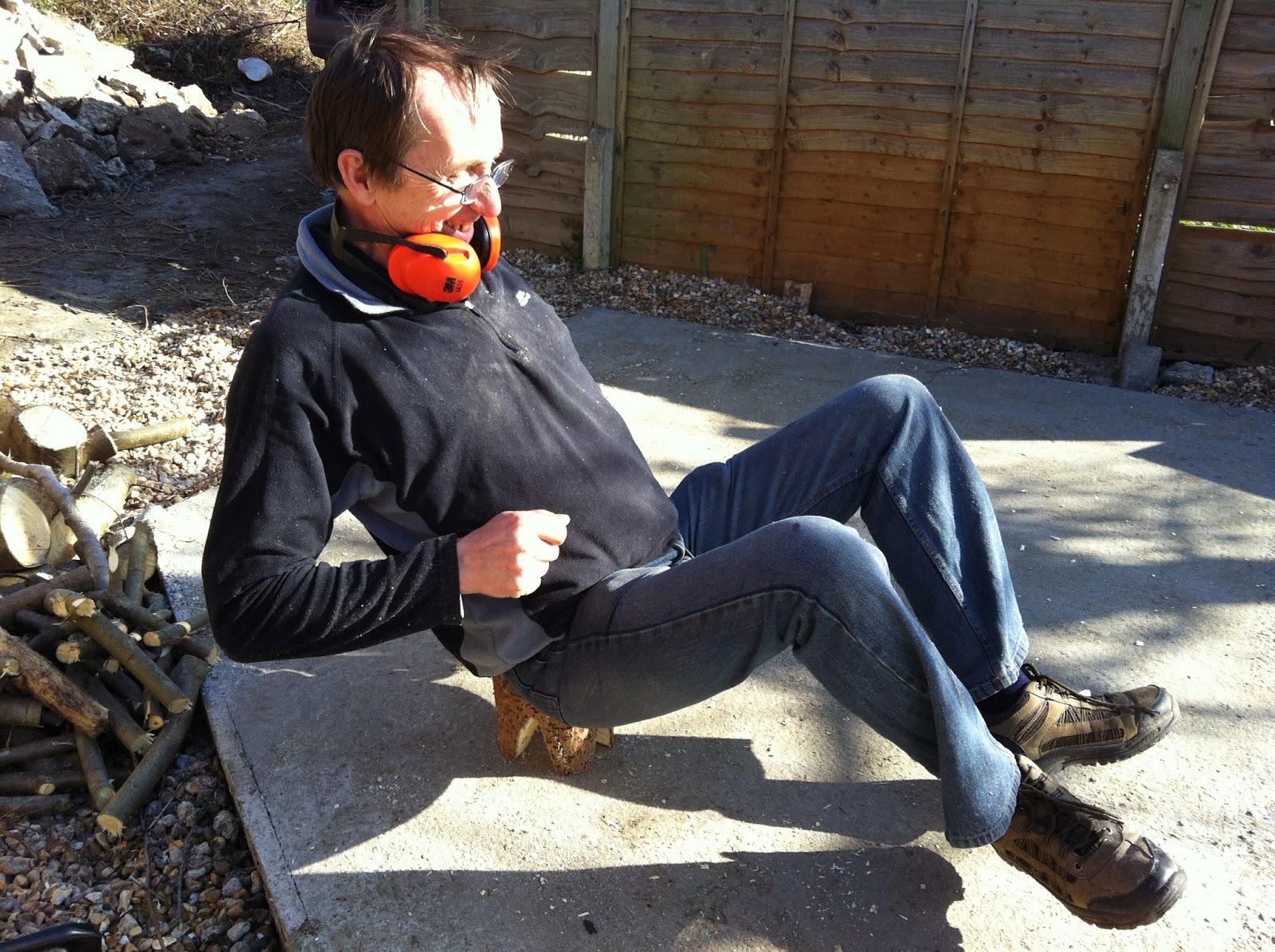 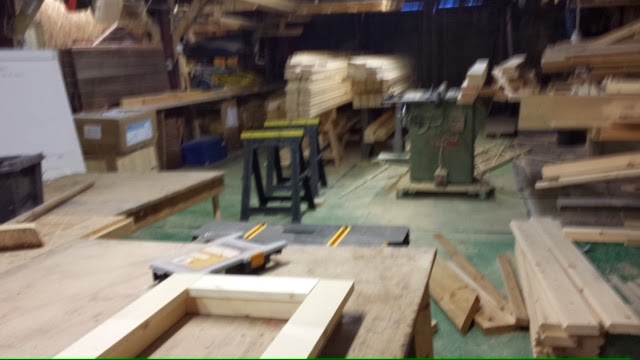 window and doors oh my!
He has set off today with all of the components on board and headed down my way. Rainy, but at least it's not hurricane weather this time!

Frid 28th AND THEIR OFF!
Starting with the base naturally! The sun is shining with the vague threat of light showers and the met office is promising a dry and sunny weekend which we really need. 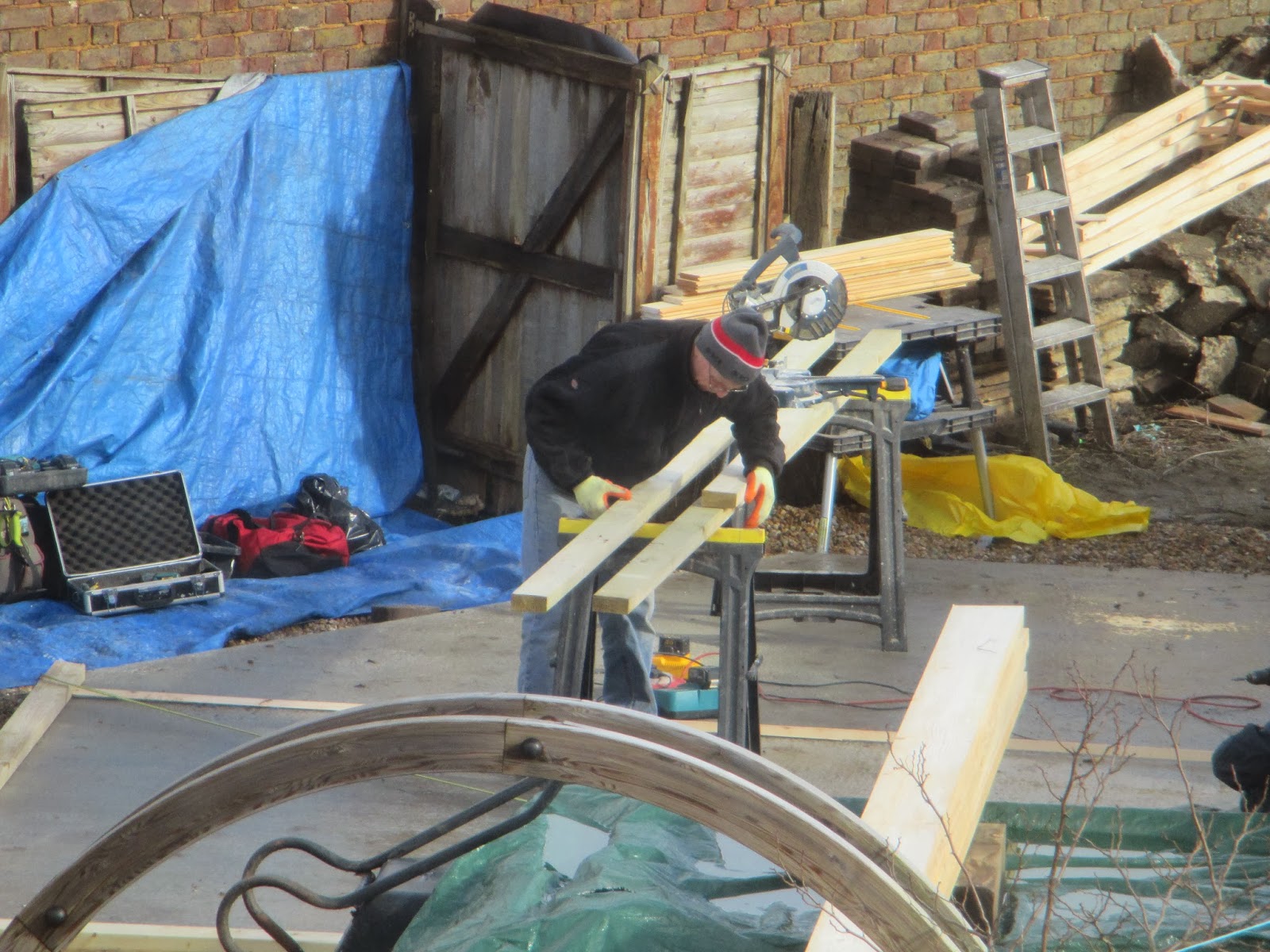 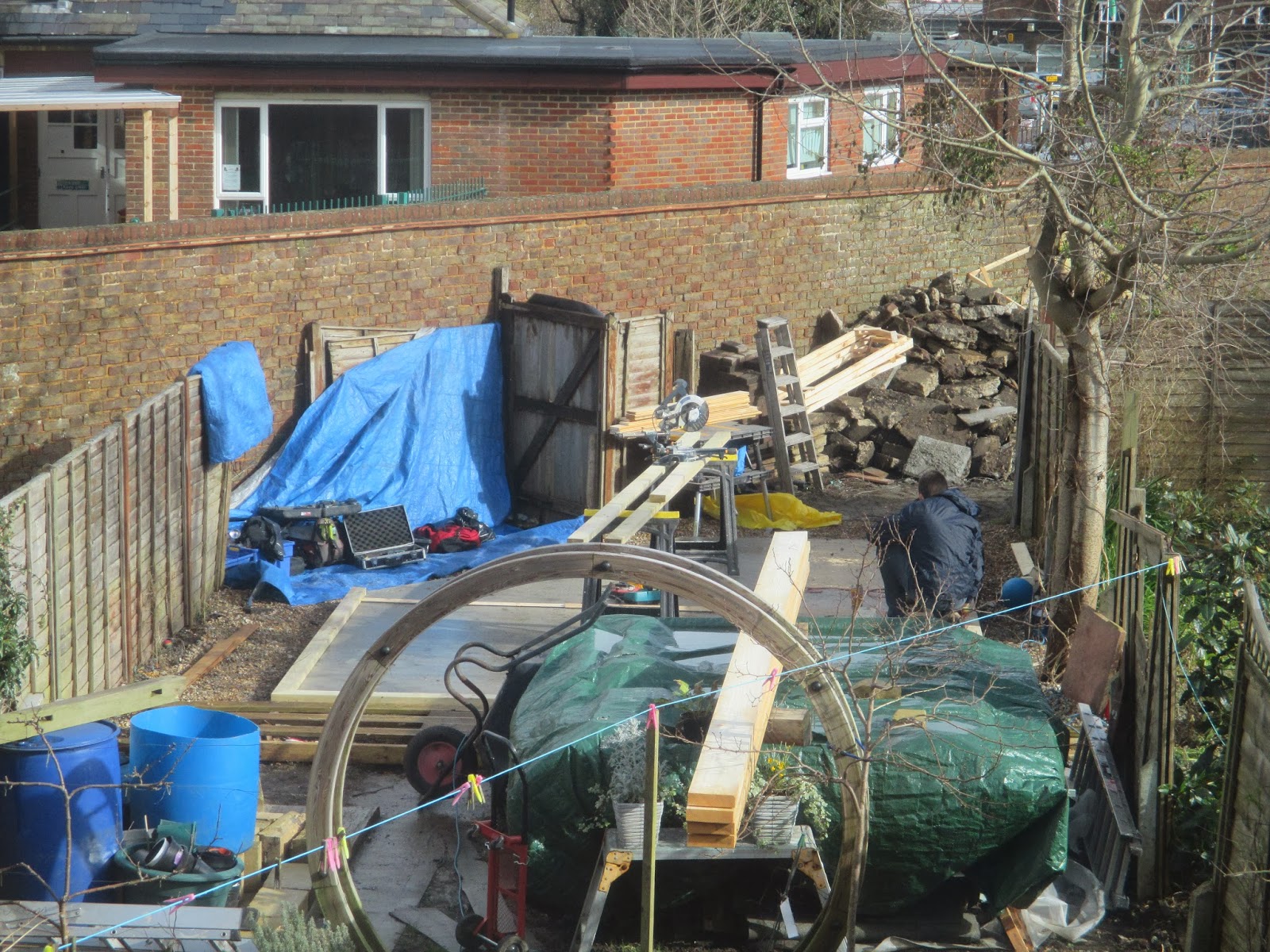 Quite a mess at the moment and spilling into our poor neighbours garden where their fence came down in the storms. There is also a massive pile out the back comprising of the incredibly thick concrete which had to be removed to make a flat base. This concrete is going off to be pulverised and recycled NOT going into landfill. I just hope it's going sooner rather than later! 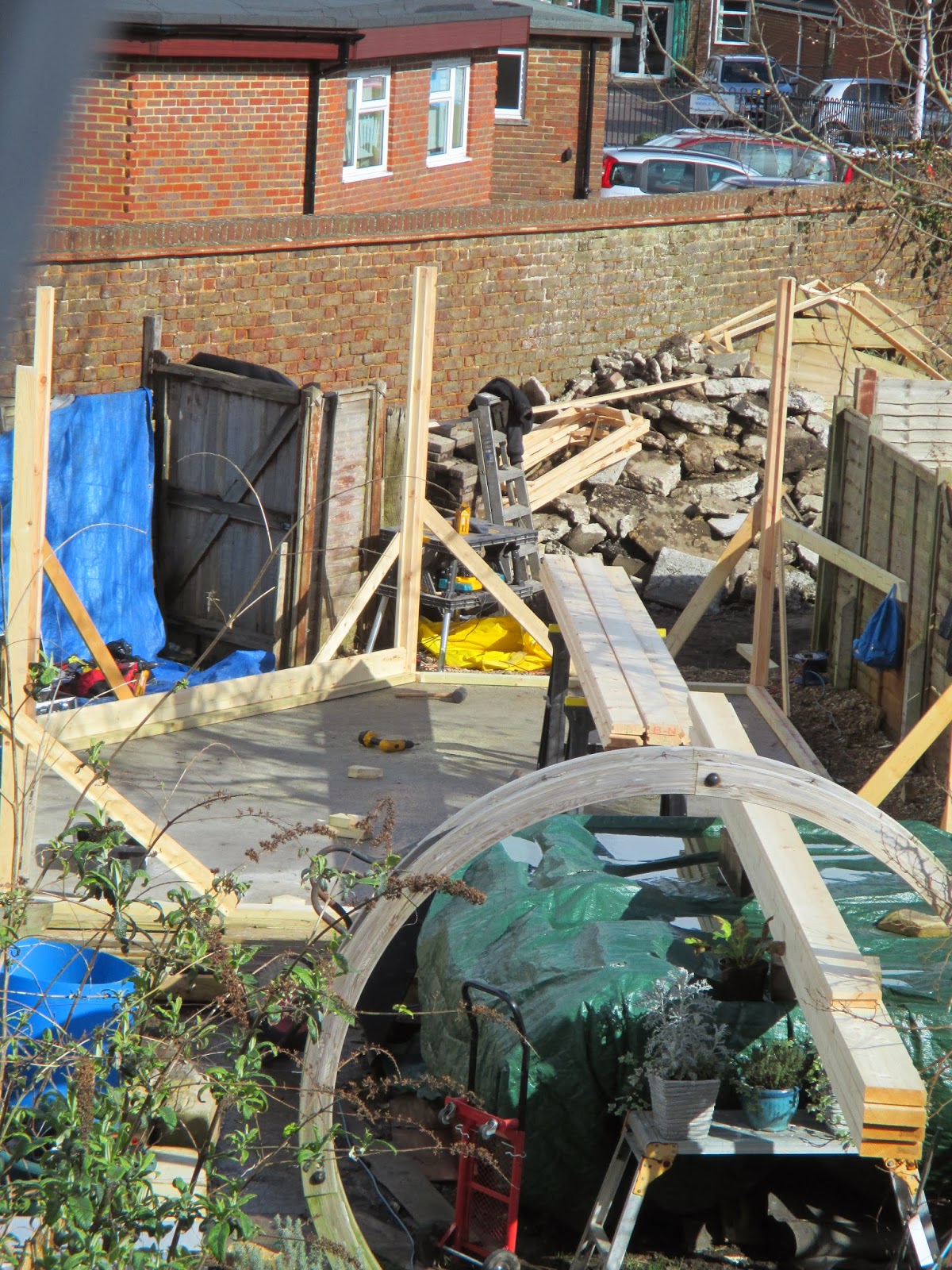 Some background info.....Richard originally did my plans back in August, September of last year and over the next few months I asked if he could add on a porch across the width -yes no problem. Then of course I wanted the moon on a stick and asked if I could have vertical red cedar cladding and Richard sensibly advised me that it would add a lot of extra cost when really it was just a visual thing. Instead he suggested using the product he had specified, but install it vertically to give me the contemporary look I long for and at a comparatively small additional cost for labour.
Bearing this in mind I was excited then a little concerned when I saw the next process 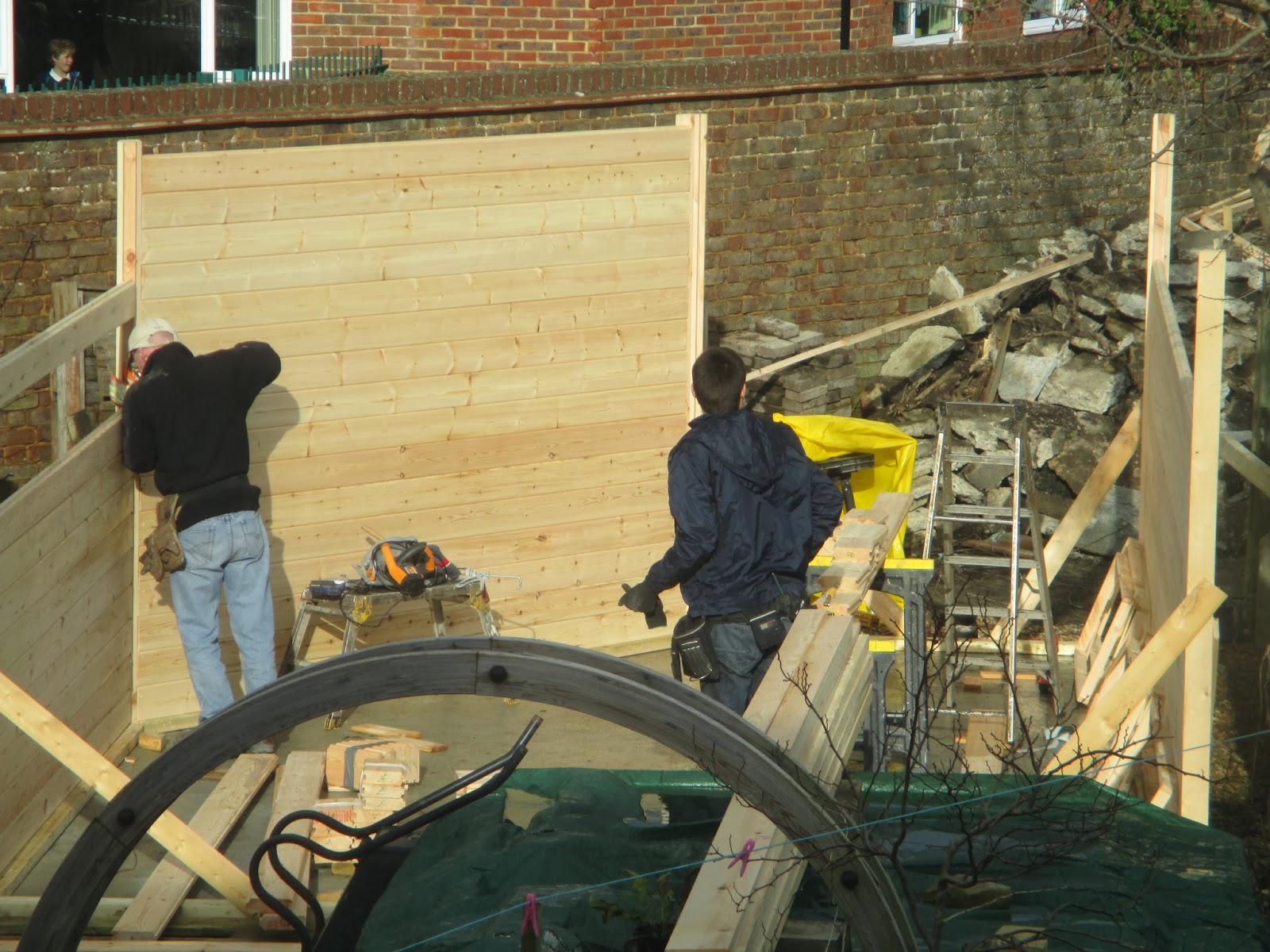 so I had to go out and in a friendly, but concerned client and remind Richard that I wanted the exterior to have vertical cladding. Oh no, I could feel his heart fall as mine had as we both realised the error and looked at all of that expensive cut to size timber :(  But there is a massive bright side for me (not for Richard poor man) as he has come to me and offered to clad the exterior in vertical cedar at his own expense because it was his error. So I get extra insulation and a much higher spec and finish than I could afford. OMG!!! I do honestly feel for Richard.His design and quality of build is light years better than anything comparable I found on the internet and as a tradesperson I have been in his shoes. Mistakes happen, but not many tradesman are craftsman and very few step up when the chips are down so I am so happy that I chose Richard. Eeeeeeeeeep!

Coming to the end of the day. We are going to go down and have a run around inside when they've gone!!! 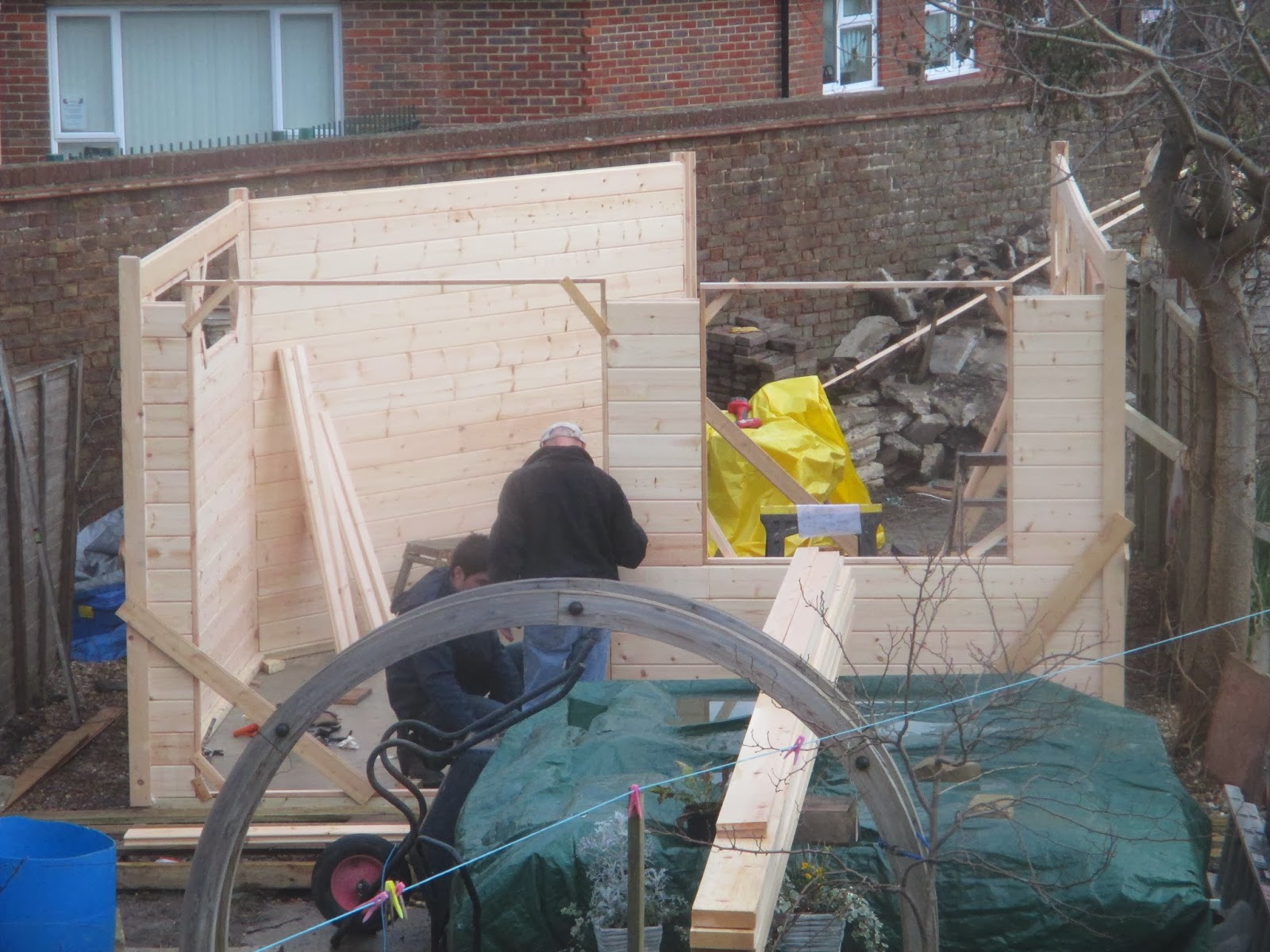 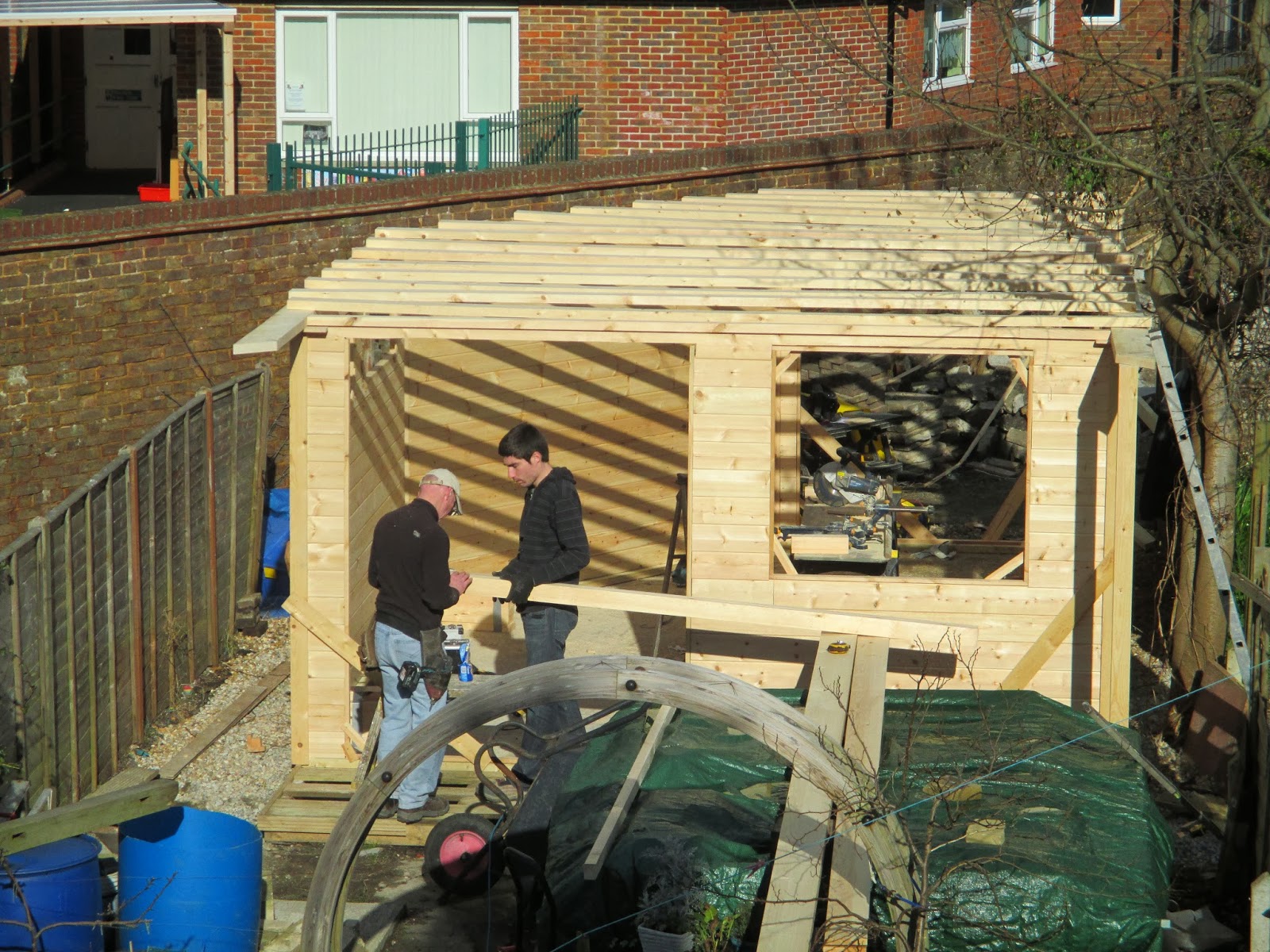 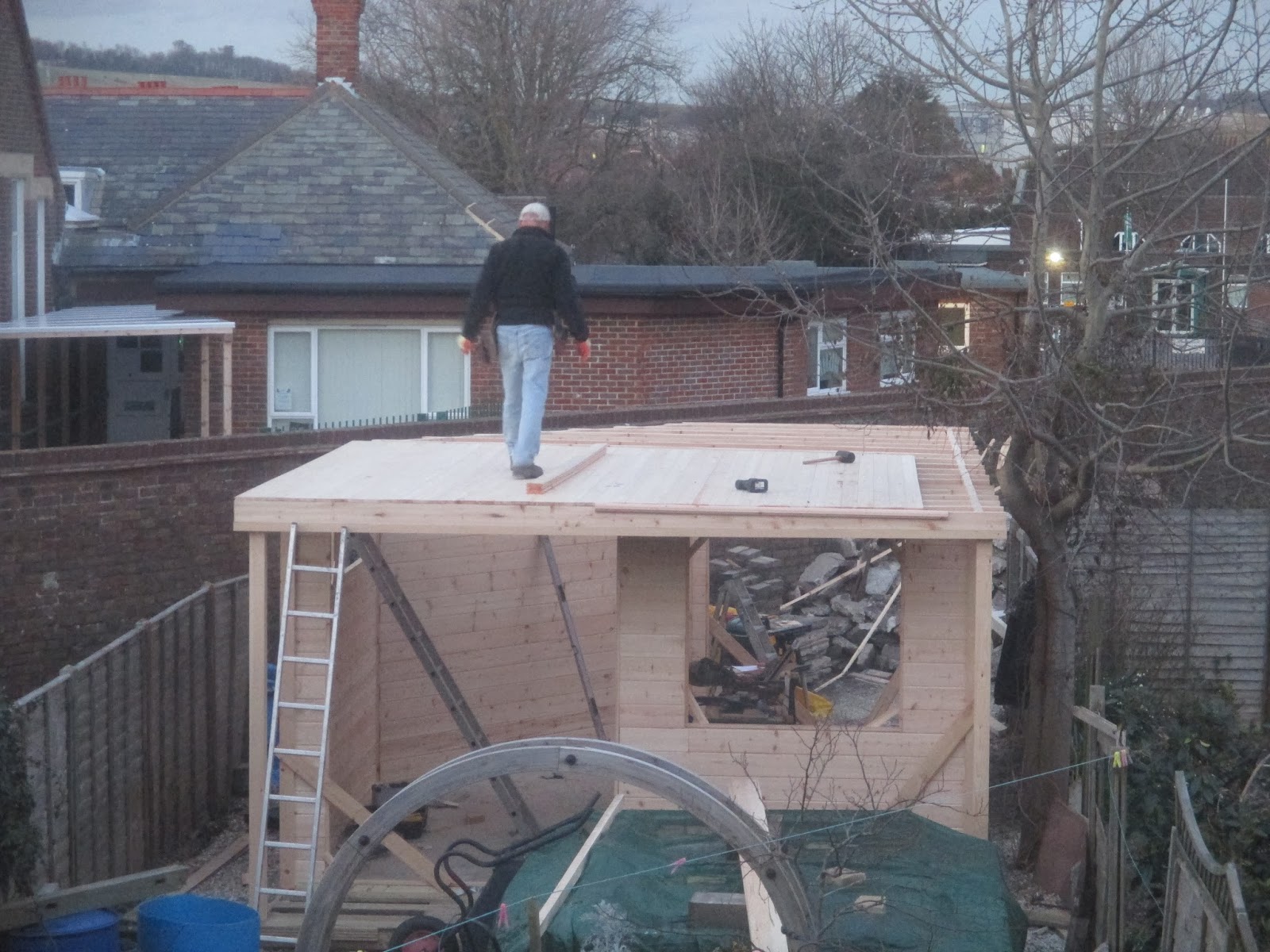 Richard and his assistant were trying their hardest to get the roof sealed before they left. Despite the brightness in this photograph it was literally minutes before the daylight disappeared.

Sunday and Monday
Next came roof insulation, more flat sheet and a final topping of rubber sheeting which covers the whole roof and wraps over the edges in one go....so no weak spots for leaks to come through. 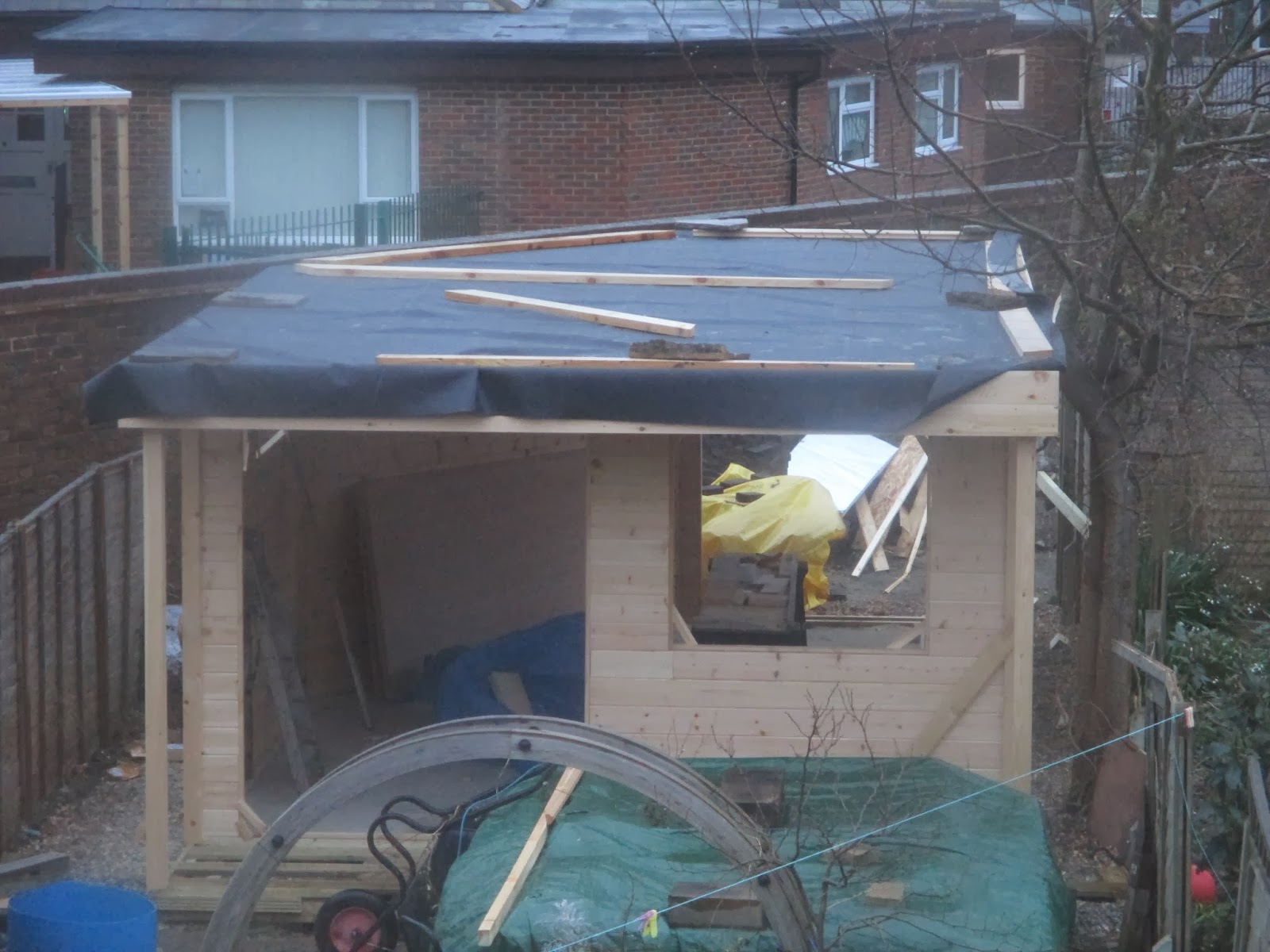 Tuesday 4th
This morning we went round the inside and marked where all of the lights and sockets need to go. Richard says he's never put so much lighting in one of his buildings, but I need a LOT of light. I have 3 double flourescent tube lights plus 5 downlighters directly above work areas. Sockets everywhere including a couple in the floor directly under the central worktable so that I'm not always tripping over wires because I am rediculously clumsy.

Sunday 9th
Richard headed home for the weekend and to collect the rest of the materials.
I have had a skip around inside in daylight and at night to make sure we have the lighting right. Weenie Woo, my trusty feline helper, has made sure that the floor is insulated to her liking and that there aren't any dangerous predators lurking in corners. 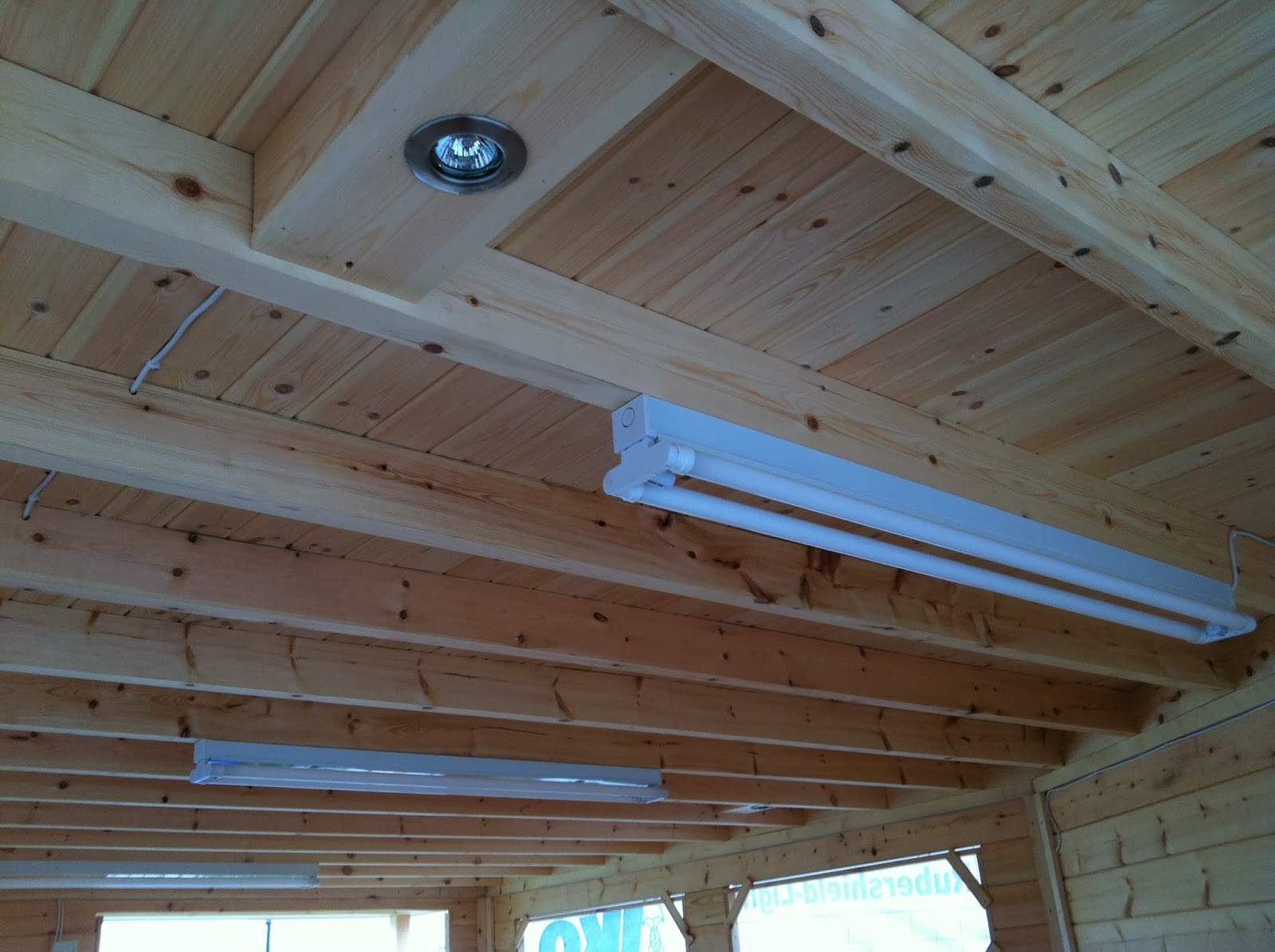 flourescents AND downlights for work areas 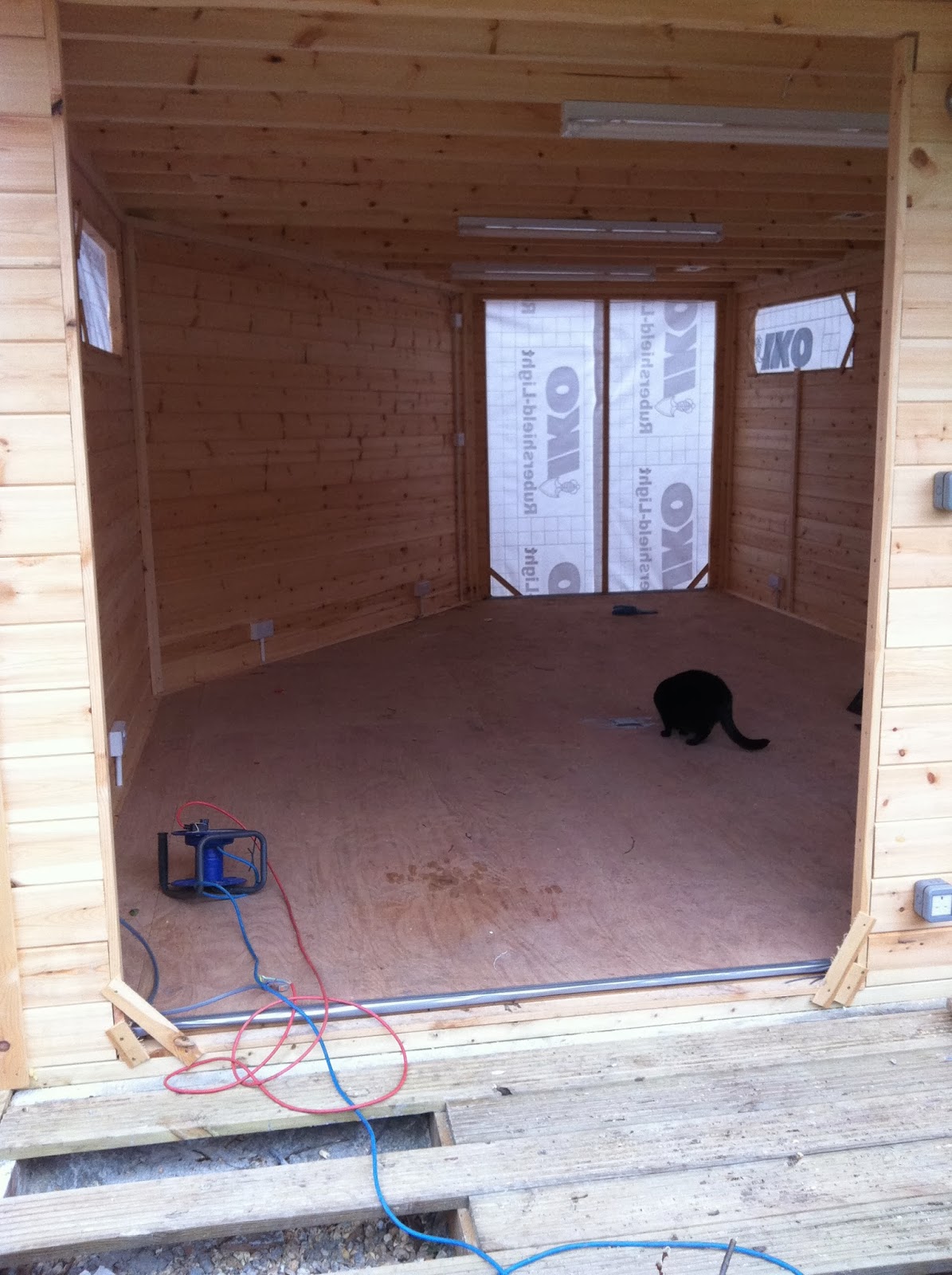 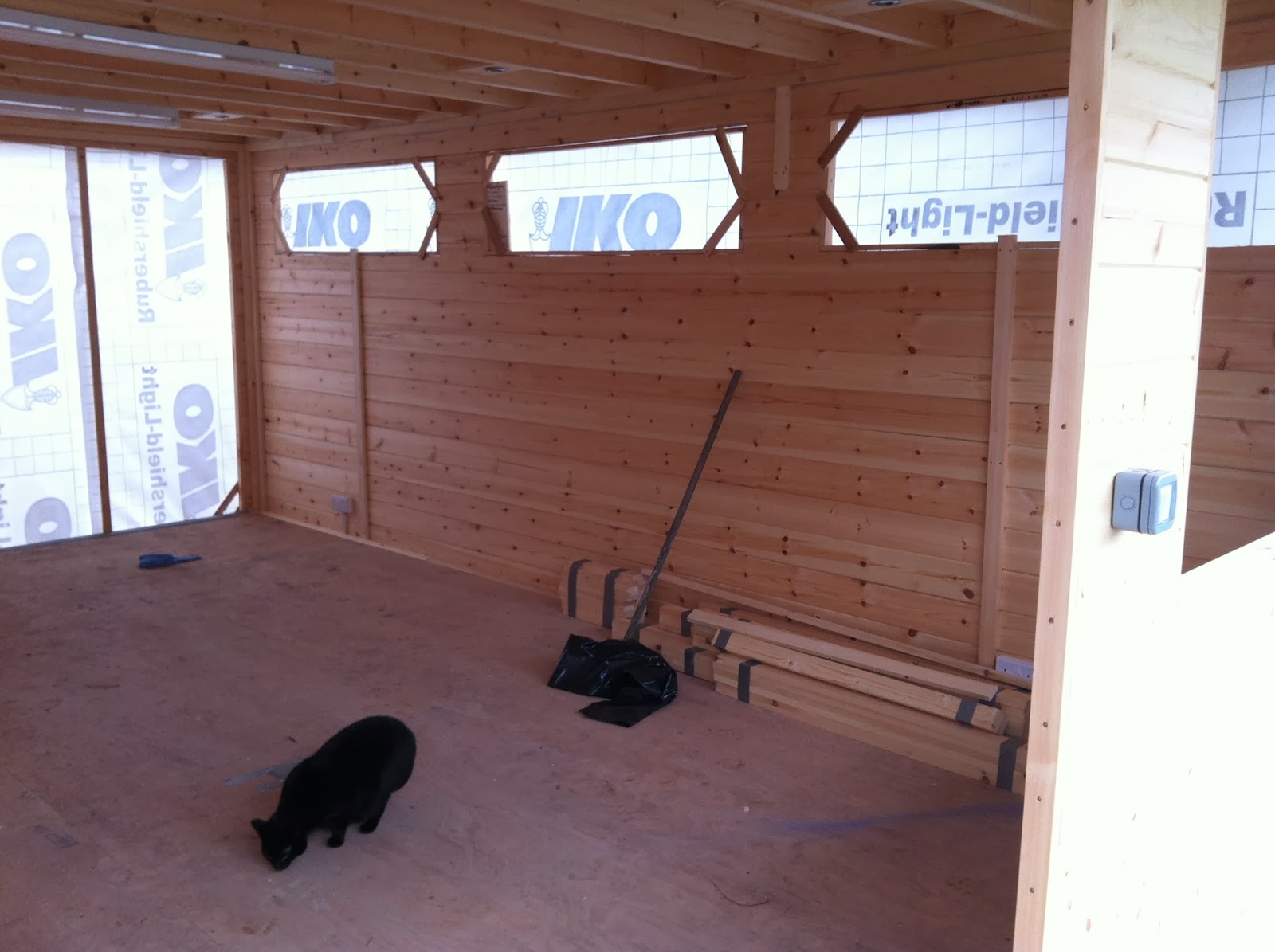 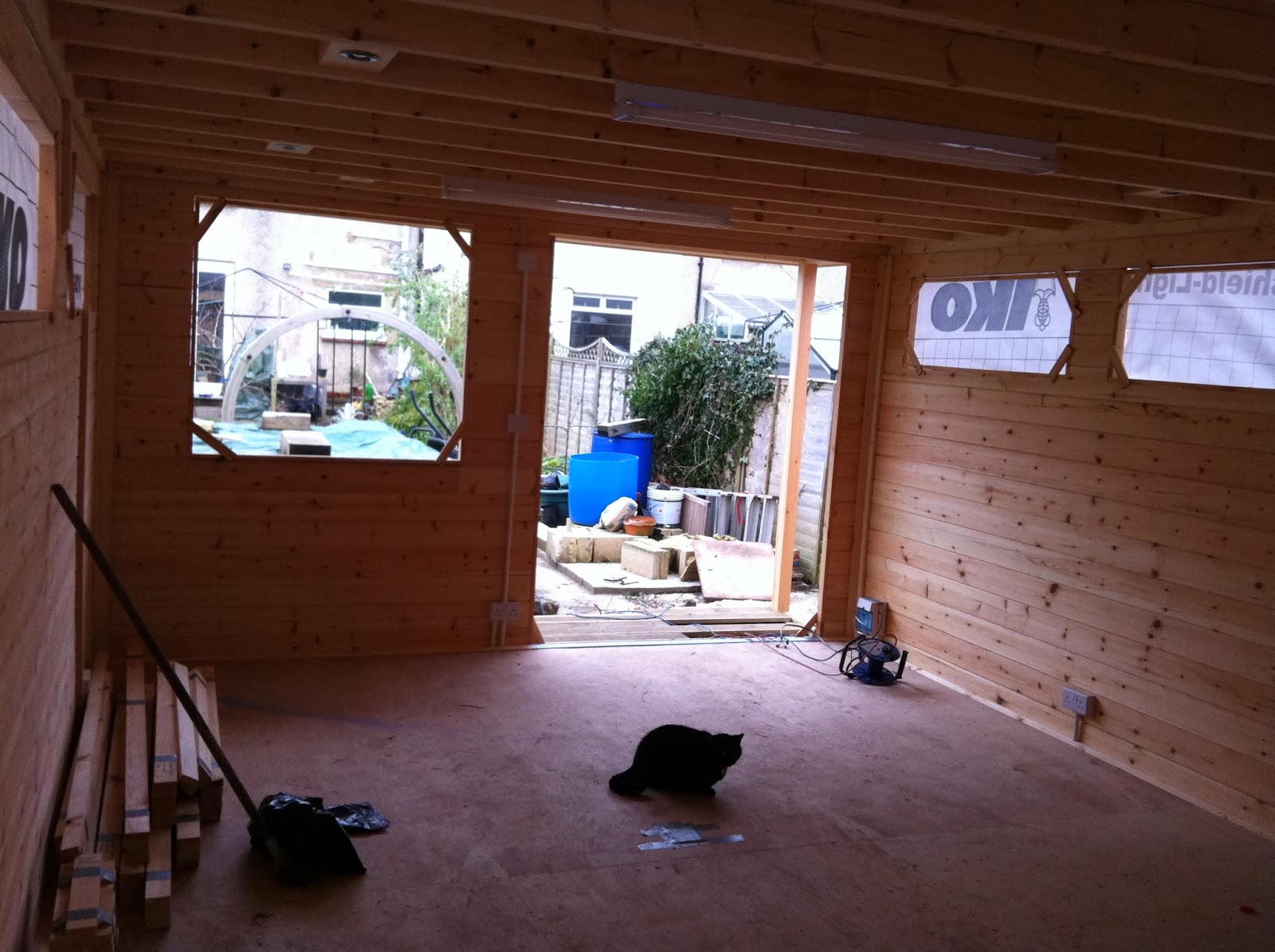 Tuesday 25th
I made a start by sealing all of the knots and priming the ceiling. I did it by hand because it's an oil-based sealant and I don't get on with the fumes any more. This turned out to be a very bad idea as it took 1 1/2 days to do and has resulted in me being laid up with a really bad back problem.

Richard returned and fitted the windows and doors.

Pics to follow when I am up and about again!

3rd April
it took me a week to recover from what my lovely osteopath tells me is a strained rib. When I say recover I mean that I 'm mostly ok, but he's warned me that this is one of the hardest/longest things to heal so I need to take it easy with the ceilings and lifting etc for quite some time, especially if I ever want to pull a bow again!
So this week I got straight into it, but to make things physically easier my lovely boyf lugged my compressor down to the workshop for me so that I could spray it all. Ceiling first,then the walls and doors. I hand painted two light grey walls to work on. Grey is supposed to be the best shade to mix colours near...no interference from other colours! Once the sun came out it became rapidly clear that I'll be working on the opposite side than I had planned. I hadn't considered that the sun would be in my eyes when I was working, doh! Yesterday I primed the floor and today got the first coat of non-slip industrial floor paint rollered on. A final coat on that floor tomorrow and I can move in on Saturday!!!!!!!!!!!
E-bay has been very good to me. I found the perfect worktable for a song a couple of weeks ago and the lovely Barry who delivers my artwork for me picked it up and brought it down for me. After 3 weeks of searching until my eyes were foggy I finally found a double catering sink I could afford and wasn't located over 100 miles away! No more paint stuff in my kitchen sink?! It's a dream shortly to come true! 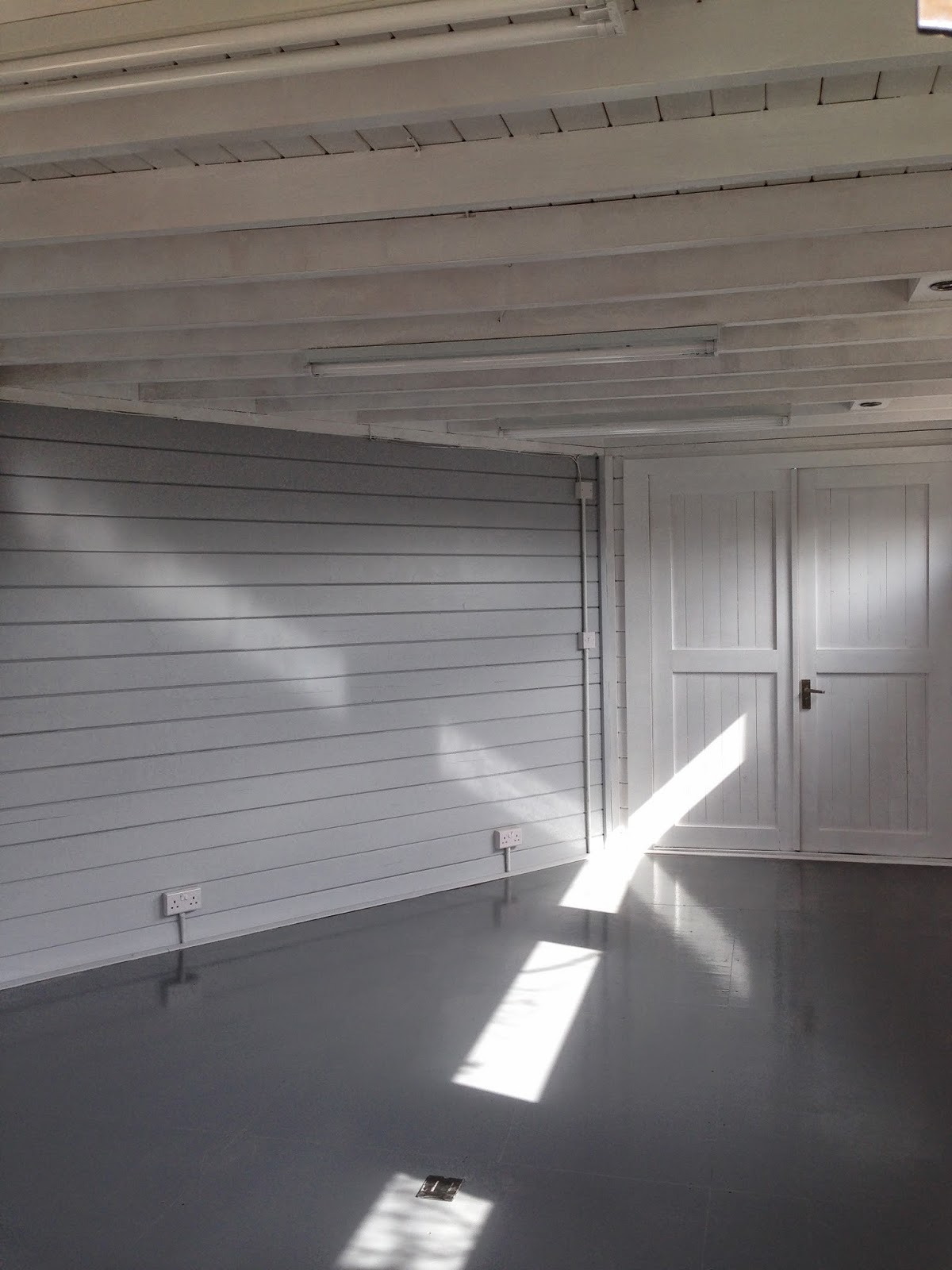 I've also been considering the security options. I really need some decent lights on a sensor at back where the rear access road is. Over a little wine the ideas became a little wilder and my other half did this quick sketch for me. I'm not sure landmines and armed Nazis would be popular with the council. You can't blame me for feeling protective after all the effort! 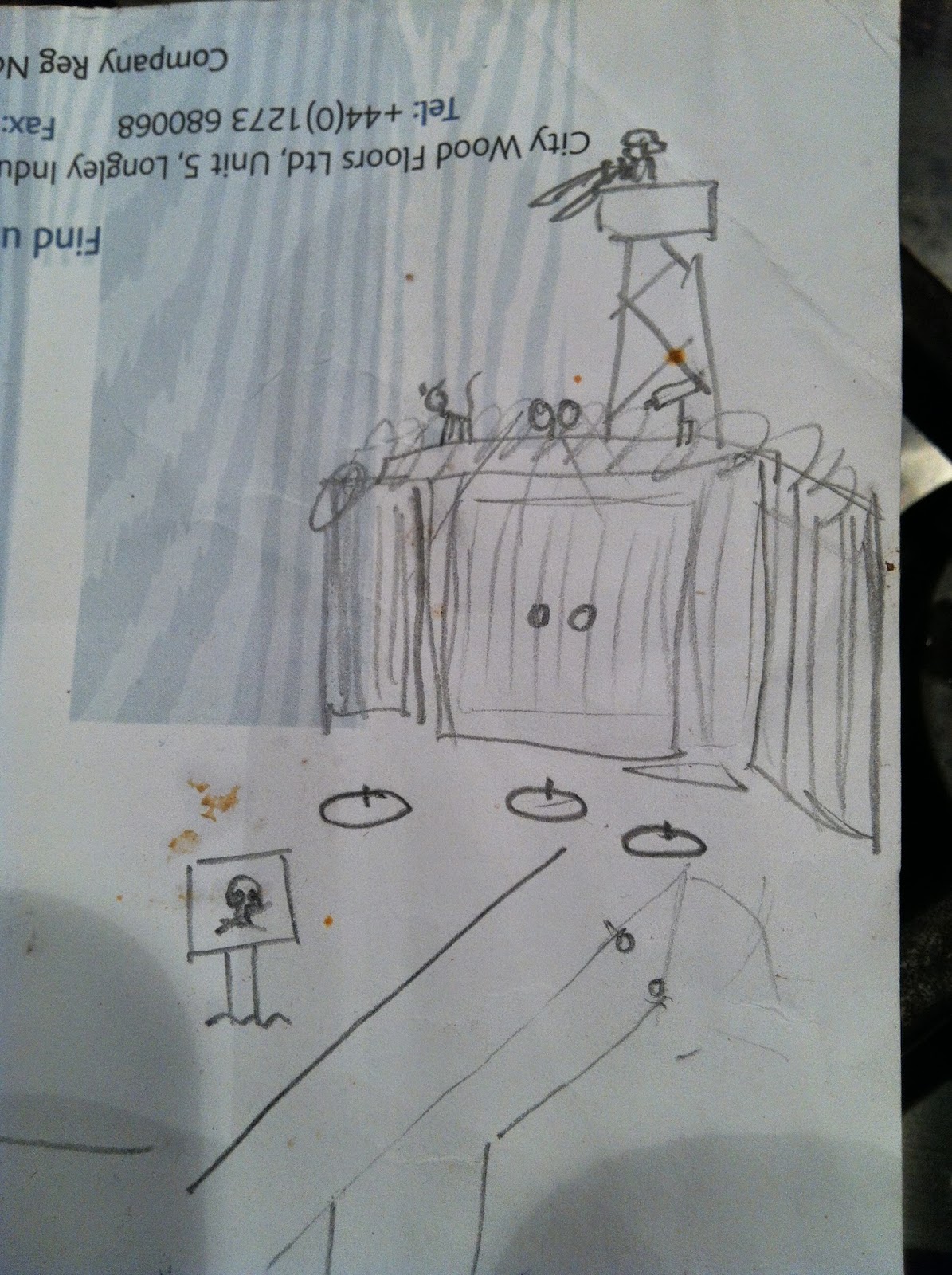 I couldn't just leave it blank on the outside so I used a Sikkens woodstain on the outside which just took the tone down a little and will protect it for years to come. The windows, doors and trim are Farrow and Ball paint, but I tweaked it from Plummet grey to my own bespoke slightly darker purple grey as I found the original plummet a tad too pale and industrial looking. Plus I have a lot of purple flowers in my garden and thought it would work well. 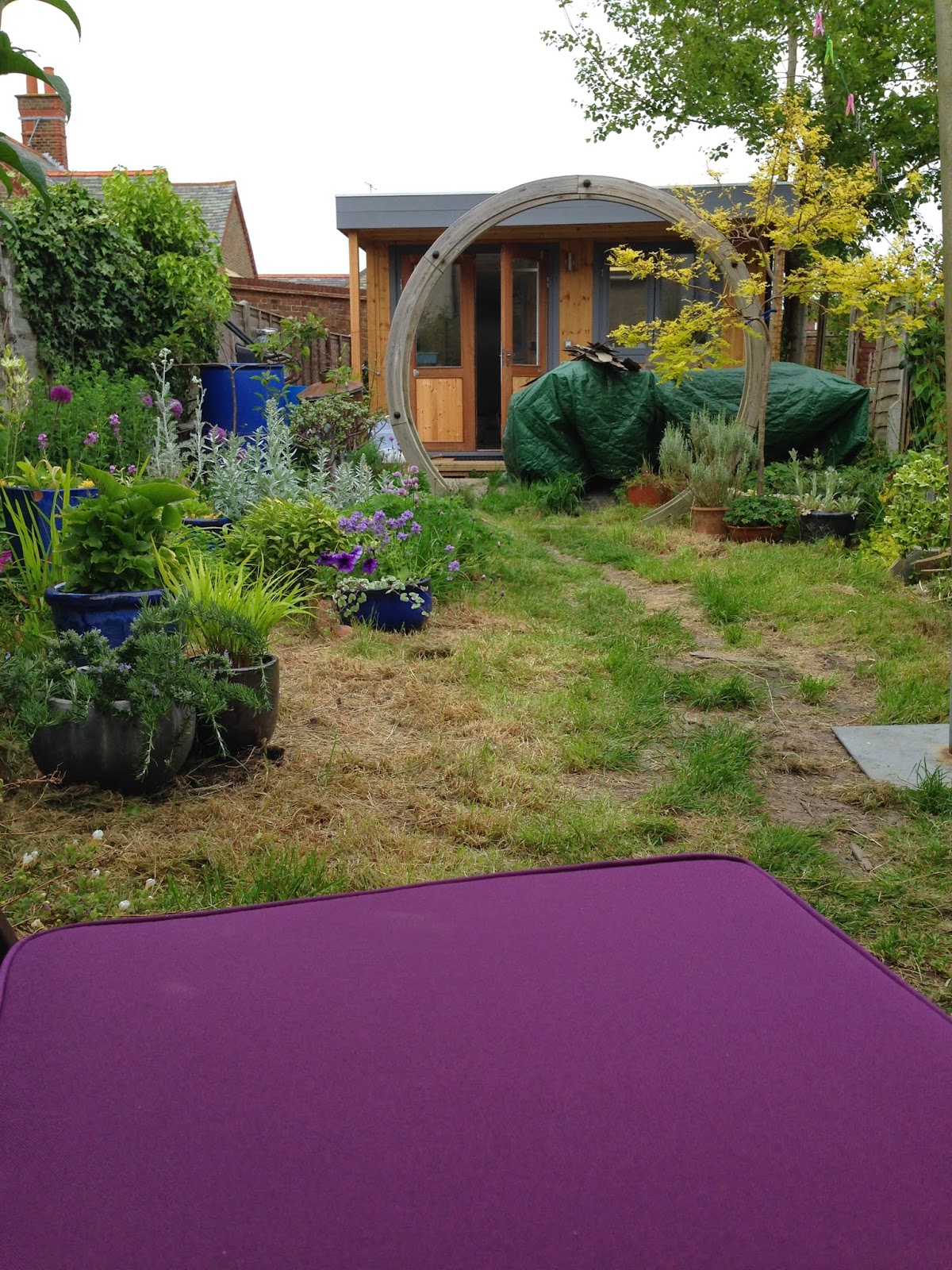 looking down the garden. The large plastic thing on the right with be gone soon. That was my old storage shed which is about the metamorphasize into a fabulous potting shed/woodwork shop. 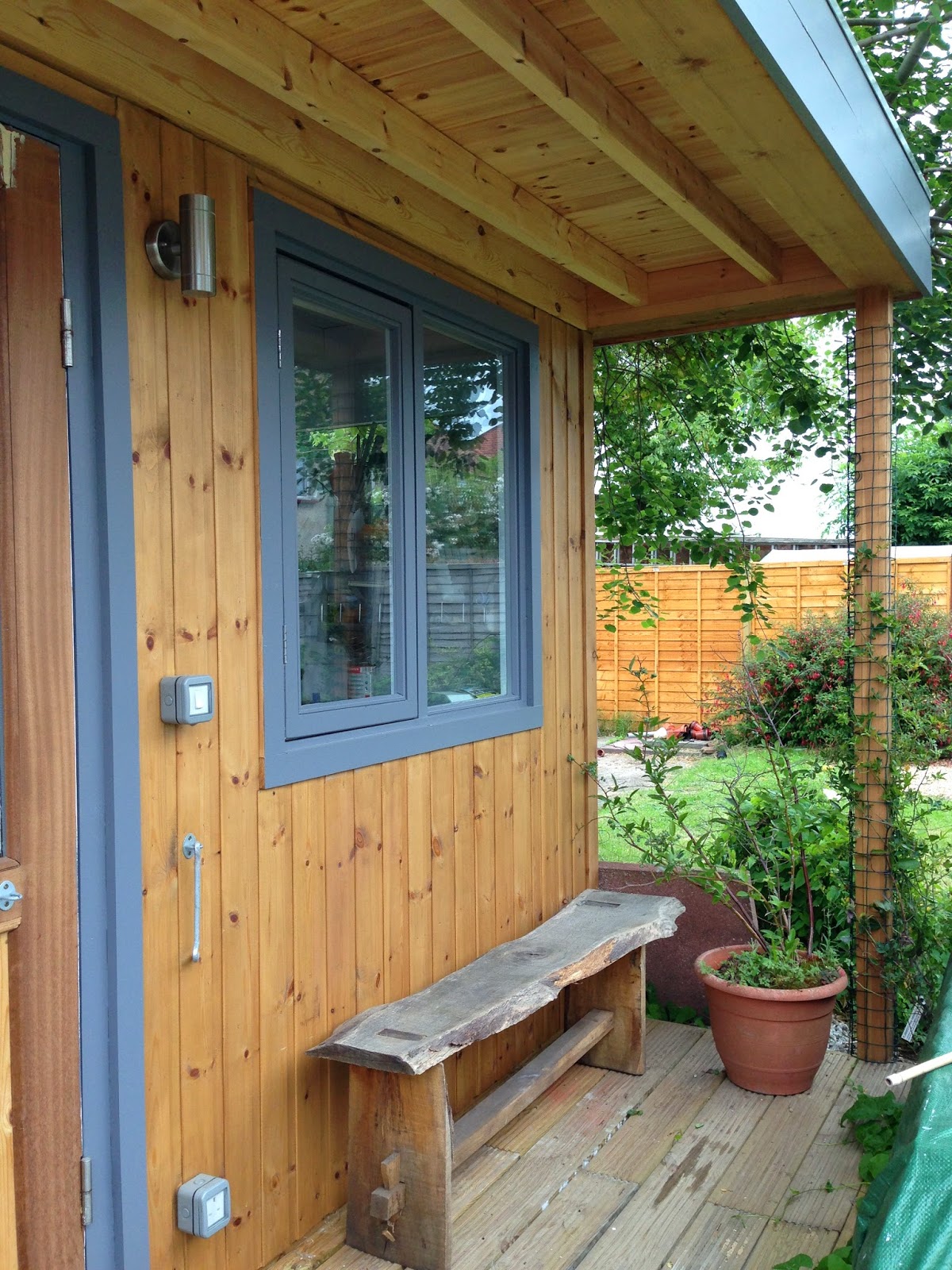 Outside is the lovely bench we made from reclaimed wood. You can see into my neighbours garden at the moment because the winter storms took out several panels, but they are being replaced really soon. I have planted a thornless rose to grow up the corner post (

I planted a deep purple clematis with it so I hope they can become friends. 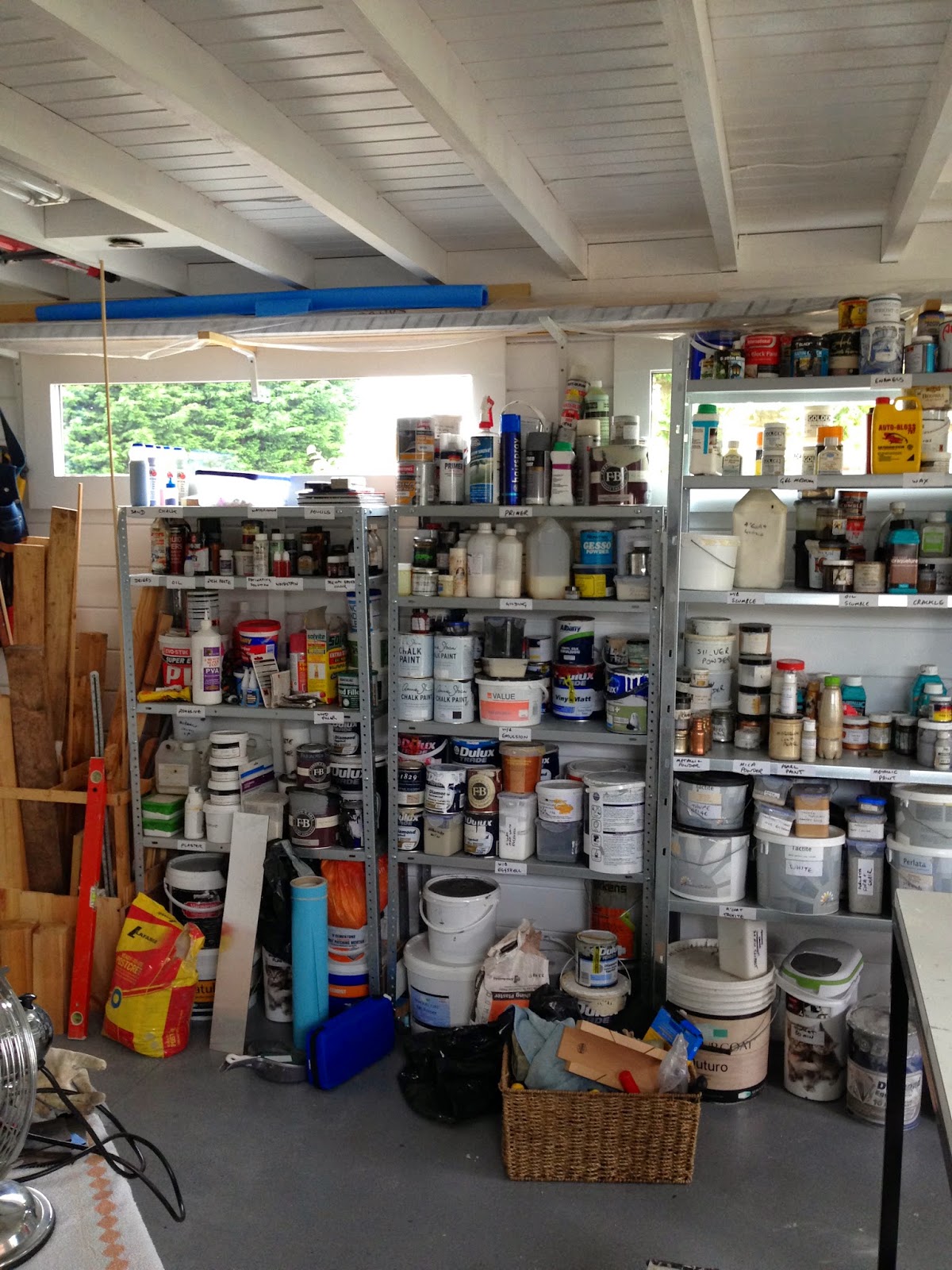 One day I'd like to replace these shelves with cupboards so that I can close the doors and hide the clutter, but at least it all has a home now. 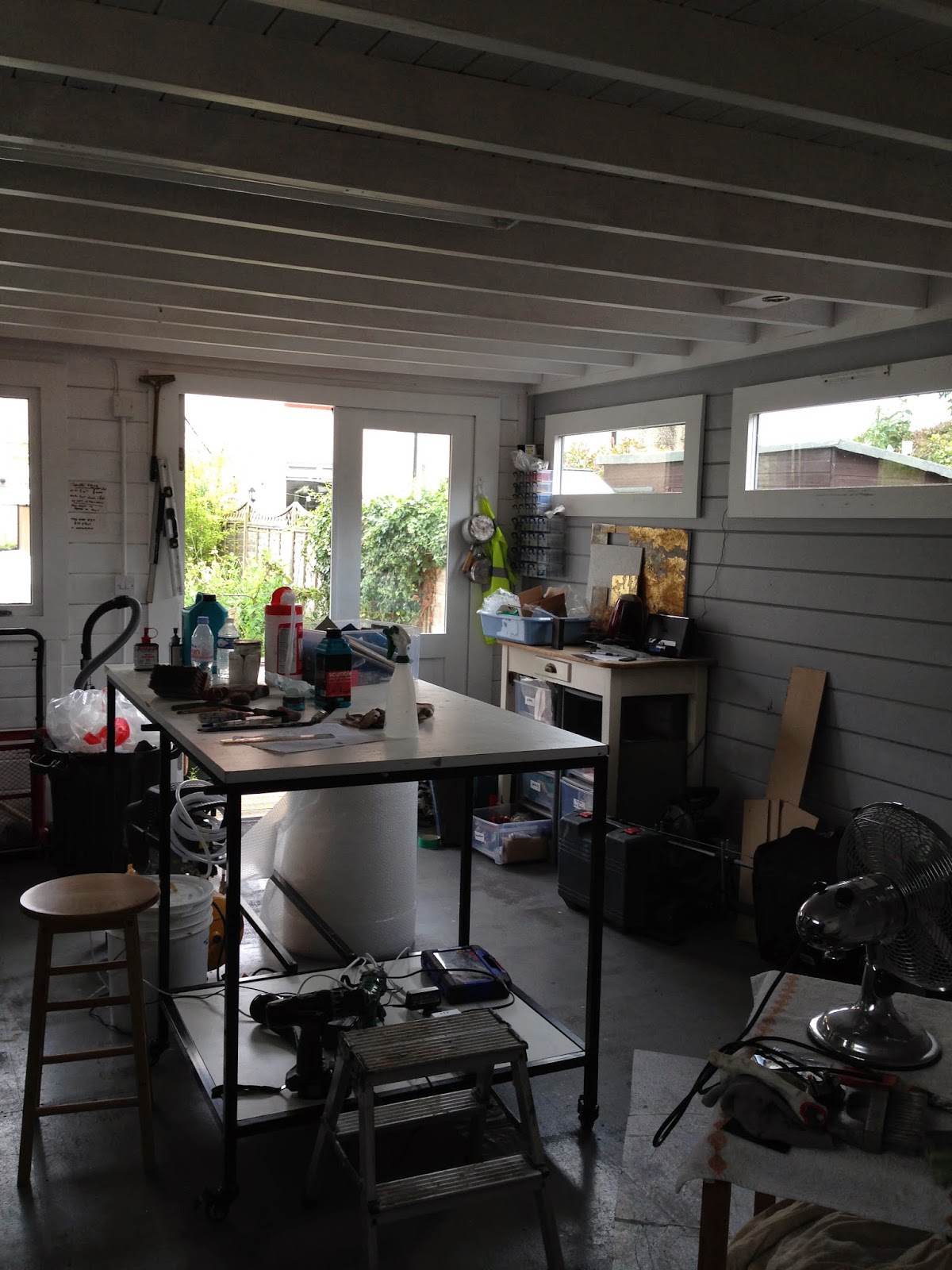 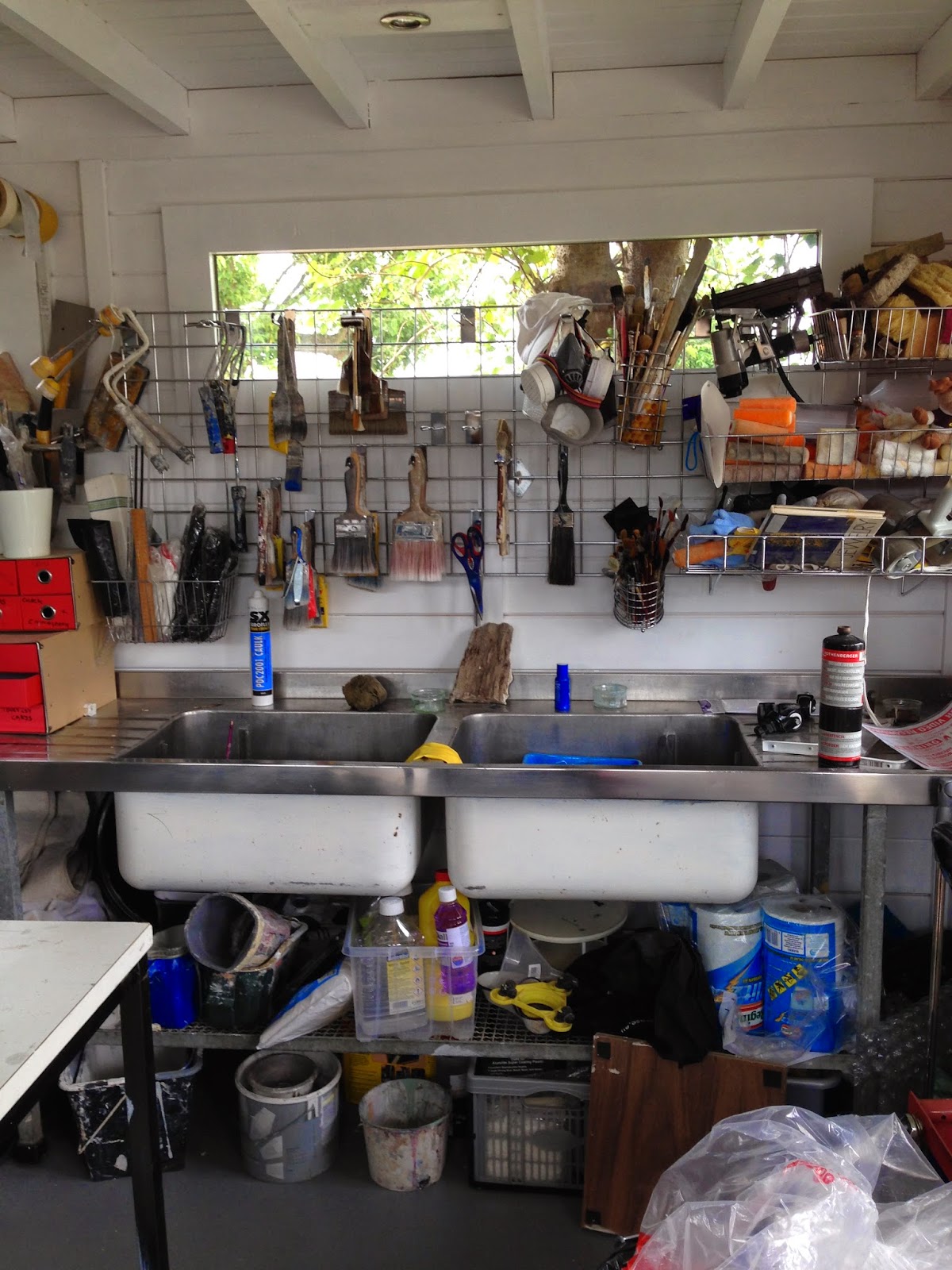 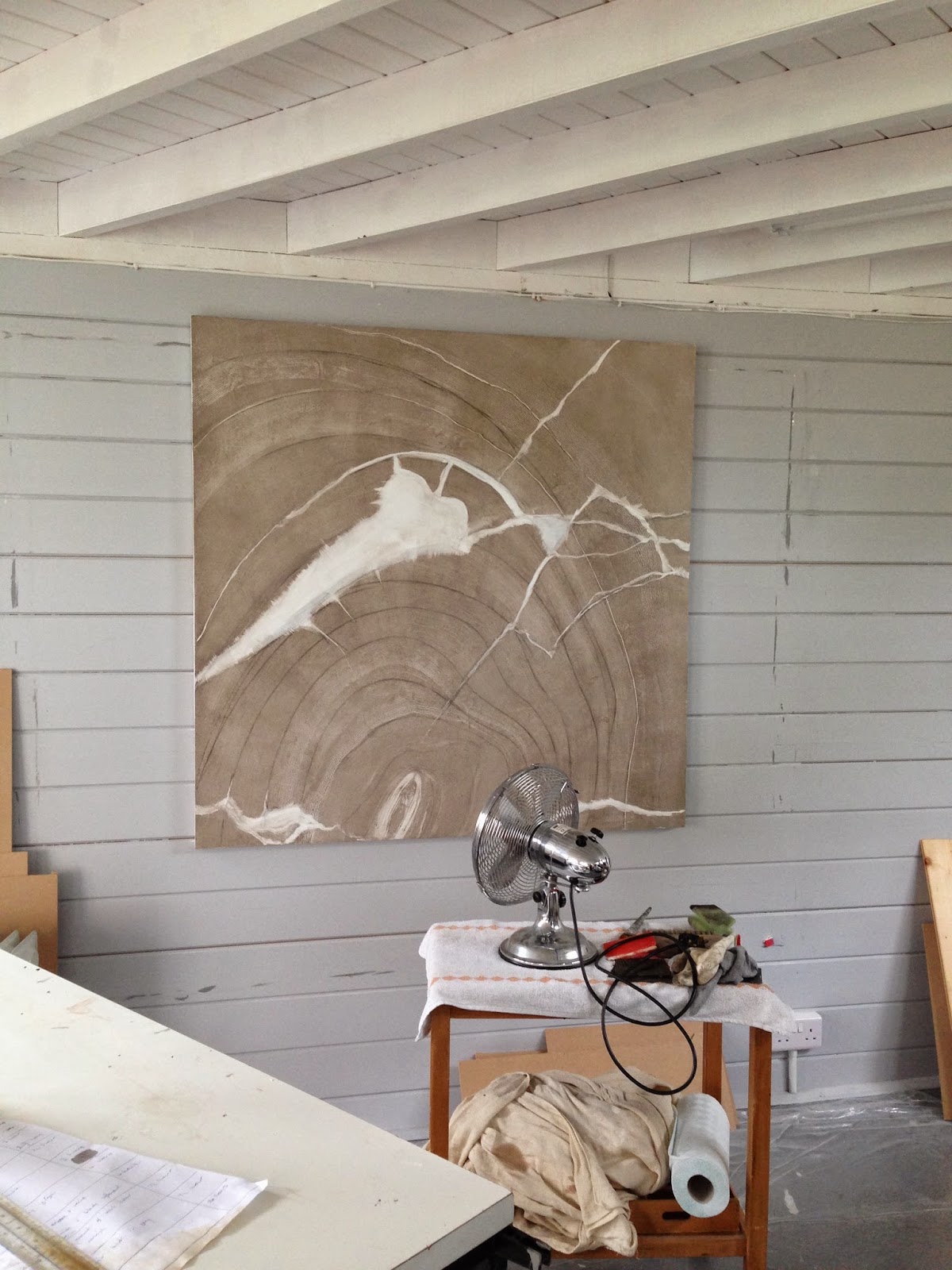 It can get a little chaotic whilst I'm working, but as soon as a new piece leaves the studio I tidy up, whip it back into shape and have a damn good hoover up ready to start afresh.

Posted by Emily Swift-Jones at 15:51 No comments: