Thanks to the wonderful photography department at The Sofa And Chair Company I finally get some quality photographs of my work.
My range is now available in their Homeware department and to date they have updated images of 4 pieces from their bespoke collection
http://www.thesofaandchair.co.uk/collection/homewares/3751-argentous

I managed to slip this one in between commissions as I was desperate to experiment with a lovely blue colour I'd used for a clients feature wall. This will be available to purchase from my website. 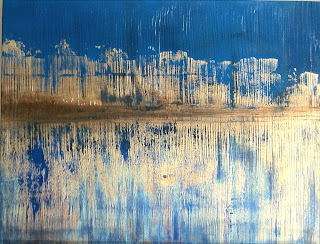 I have neglected my blog again! I get caught up in a whirl of creative activity and time flies away from me.

Several months ago I received an enquiry from the interior designer at The Sofa and Chair Company in London. To be completely honest I didn't believe that the e-mail enquiry was genuine, but followed it up like a polite and sensible girl.
A phone call led to a meeting with the companys directors and the heads of design and sales to which I took a selection of artwork. A couple of weeks later I arrived at a further meeting (which I attended at the end of a busy day without having eaten ....choc chip cookies were gratefully received just as I thought my eyes were about to roll back in my head). Then we narrowed down what they were looking for to make their first collection of artwork to furnish their Acton showroom.
The 9 pieces commissioned range from 90cm x 70cm to 300cm x 240cm. The 3 largest were created on site as getting them through the workshop doors would have been impossible!
In the very near future there will be an official launch of this art collection, but it is already displayed in the showroom for customers to purchase....actually, I'm in the process of creating because 2 of the pieces as they have sold already and they need replacements! It's all very exciting.

As soon as the launch date is announced I will post pictures of the pieces I've created for the collection which will be available in-store and on-line.

TTFN
Posted by Emily Swift-Jones at 17:23 No comments: